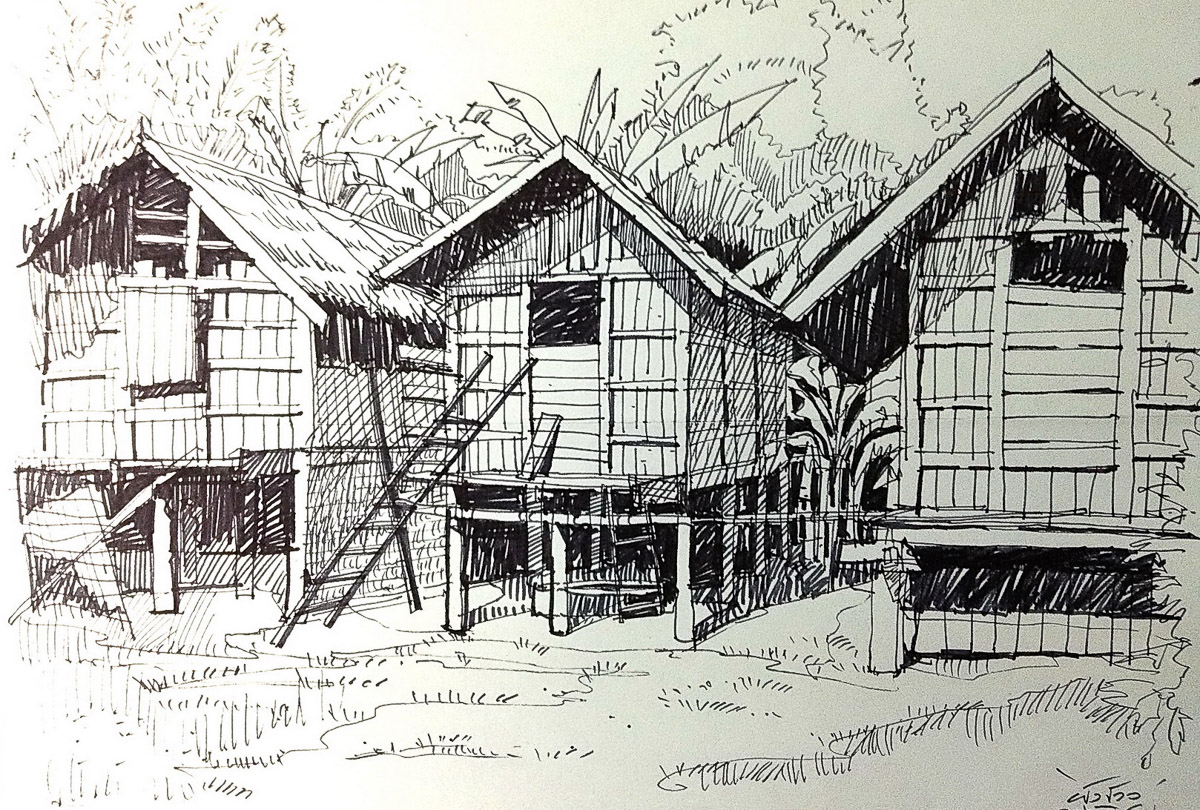 We have a joke about our weather; Thai have 3 seasons which are Hot season, Hotter season and the hottest season. Thailand weather most of the time is hot and humid so we have to adapt in order to live happily ever after.  Thai traditional house is truly a useful ancient Thai wisdom.

Thailand have 4 regions each regions have their own style of traditional Thai house. 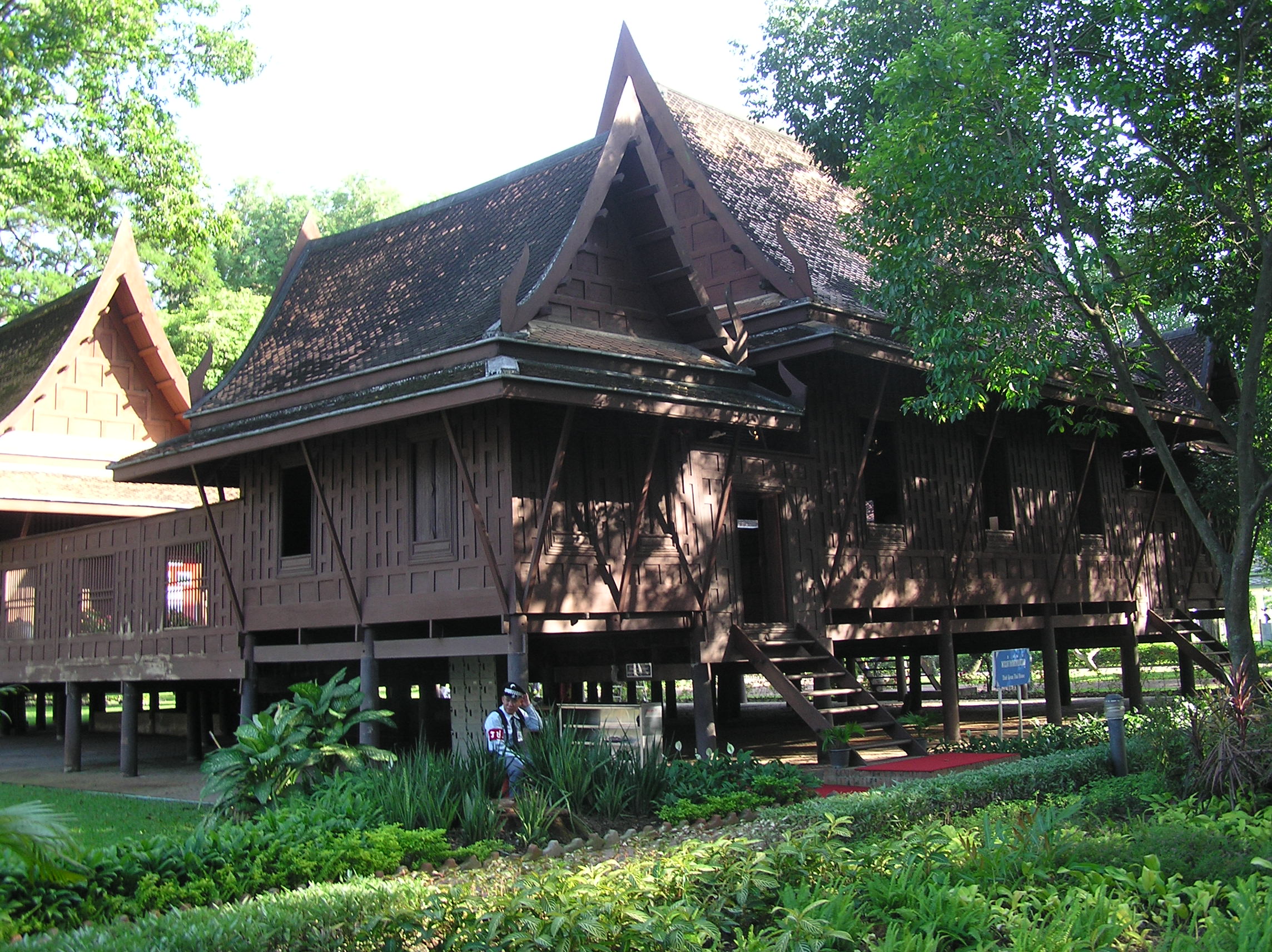 Central style is the most common style in Thailand and can be divided into 5 types; Single house, Group house, Official house, Waterfront house, and Raft house. The high gable roof which in its center has a shape like the halo of the sun is the most outstanding structure, where there is a space for cooking smoke to flow out.  The long overhanging eaves can protect from sun or rain.  The wide terrace outside the house is suitable for summer use.  The high open space under the house which is supported by many poles is the area for storage of tools or agricultural equipment, parking, eating meals and other activities.  You can see central style of Thai house at ‘Suan Pakkad Palace, which located in downtown Bangkok.

Ruen Khrung Phook (Ruen Mai Bua), Real Wood House and Middle Period House are the three types of traditional Northern Thai houses.  The first type is the oldest type and it origin is in the countryside of the North.  The structures are composed of a roof woven from grasses, floors and walls made with bamboo tied with rope (PHOOK).  Poles and beams are the base structure and are made with hard wood.  The second one is made of wood which is why it’s called Real Wood House.  In the north of Thailand most of the area are mountain and forest which is why they have many kinds of woods.  The second type is also the strongest type of Thai houses.  This type has two styles of roof. KALEA house, an ancient style of LAN-NA people which is decorated by a cross of wood in a V or X shape at the top front.  The other roof type is known as “wind spaces house” and the structure was influenced from the central region with a high roof with the halo of the sun in the middle of a gabled roof and the roof tiles are made from baked clay in a fish scale pattern.  The last type was originated in King Rama V period, it structure not only influenced by Lan Na style but also by western style because in King Rama V period French and English people often visited Siam (The old name of Thailand) for trading.  The house was improved from a basic LAN-NA house, with more complicated layers on the roof and more holes in the walls to make the doors and windows.  It is decorated by using stained wood, an influence from western.  You can admired North Thai house style at Royal Park Rajapruek in Chiang Mai. In the park you will see lots and lots of beautiful flowers. 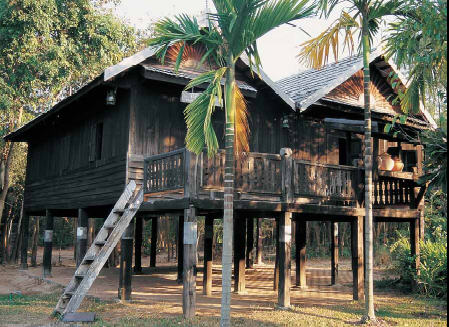 North-Eastern weather is the hottest in Thailand and they are often suffer from drought.  It forced people to move from place to place.  That’s why some North-Eastern Thai house was built as a temporary house.  The temporary one was reconstructed from the old wood in harvest season.  The house will last for 2–3 years and is a simple structure that can pulled down easily.  The four sides of the walls were open and the walls were roughly built with bamboo.  Second type is Semi Permanent House, it has additional part to a main house building.  The additional part has 3 styles: a roof overlapping a rice storage building style, a separated main house from all stilts buried into the soil style and one that built on a middle pole which stops at the beam and is not attached to the soil.  The Permanent House is the last type with 3 different styles: Overlap house, Twin house, Single house. All the houses had a few narrow windows and only have one door in the front which make inside the house darker than the other Thai houses. 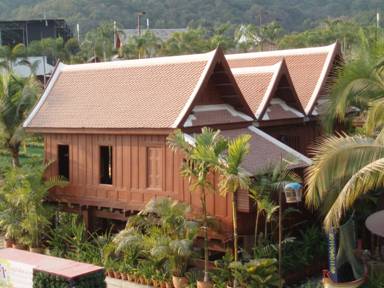 Summer and Rainy are only two seasons Southern of Thailand have, it land and people have to withstand a lot of typhoons.  This is the main reason why Southern Thai house are the strongest Thai house among other regions.  There are 3 types of houses, Ruek Khrueng Phook, Plank House and Masonry House.  The distingue style of the southern region house are the structure of the roof and the stilts on cement poles.  The walls are made from layers of wood boards, the windows are narrow, using mortise and tension joint instead of the nails, and it has a lower gable roof than other regions.  However, the 3 types of roofs were influenced by other countries.  Gable roof follows the basic style, tiles are made of grass, baked clay, or rhomboid tiles and the roof will be decorated with carved wood if the owner is of high status.  The second style, PANYA or LIMA roof was influenced by Indonesian and Malaysian.  This roof was built to fight against storms and the slopes of the roof are trapezoidal.  Brann’s roof or Manila roof are the last type which was integrated from gable roof and PANYA roof.  The roof is lower than the other types, the top part is a gable roof and the bottom part is a PANYA roof, the trapezoidal roof supports the top part.

Thought, Thai houses from each regions are different, their main structures are common.  Thai houses usually made of bamboo or wooden structure, they raised on stilts and topped with a steep gabled roof. That is Thai, we may come from different places, speak in different Thai accent but our heart beat as one.