If you’ve ever been to the Land of Smiles, you may have seen some major habits of us Thais that you might find them a little (or very) odd. Sometimes, we even agree with you as well, but it’s these weird Thai habits that makes us who we are. Thus, I’m pretty sure that you will have seen at least 1 of the 7 weird Thai habits during your holiday in Thailand.

Let’s see what they are! 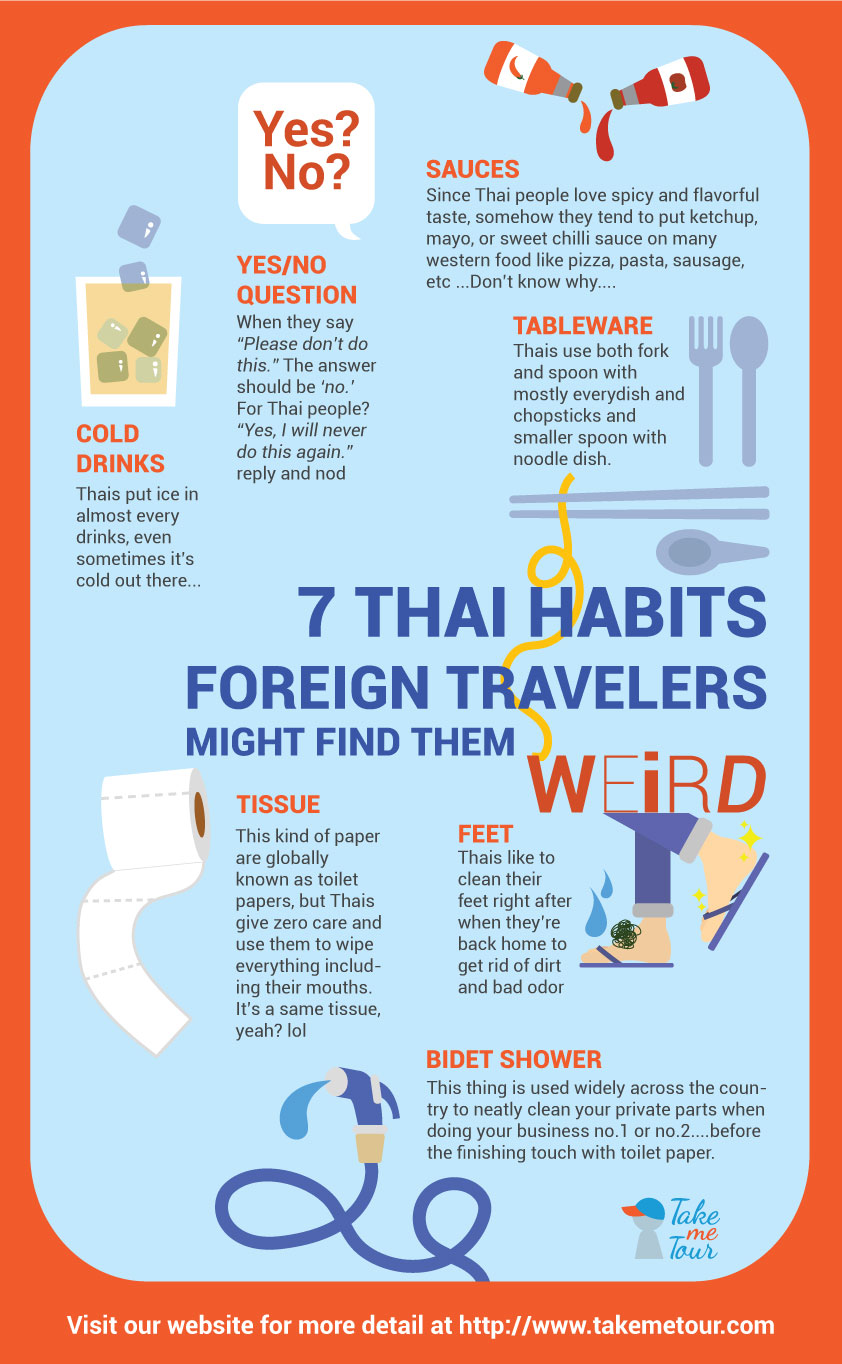 Unlike Westerners who mostly use fork and knife to eat steak or other dishes, and spoon for soup, we use fork and spoon to eat rice-based dishes. Whereas for soup and noodle dishes, we use chopsticks and the Asian soup spoon. Don’t be surprised if we awkwardly use both fork and spoon while eating pasta or using knife and fork to eat pizza or fried chickens from KFC. We sometimes assume that using both knife and fork is the correct way to eat every western food, which proves for a confusing sight.

2. The saucier the better

One of the very distinctively weird Thai habits is that we REALLY like to put a lot of ketchup onto steak, pizza, pasta, or basically any western food we feel like we want to. If you have the chance to observe us when we’re having a meal at KFC, you will see that we put a lot of ketchup and sweet chili sauce (some even mix them together) on a separate plate as a dip. It’s weird, but we’re just so accustomed to spicy and flavorful tastes of our cuisine! When we see any Western dish that seems bland or cheesy, we’ll most likely ask the waiter for ketchup. Putting a little bit of sauce is fine, but for some of us, the more the better!

This might be a little hard for foreigners to understand. We say “Krub” (for males) and “Ka” (for females) at the end of a sentence to add politeness, and also as a way of affirming our stance. It’s normal to add these words to an affirmative sentence, but sometimes, we also use them to answer negative questions. For example if someone asks, “Don’t you think it tastes really bad?” or “Aren’t we going to this place first?”, some of us will answer krub/ ka while nodding even if we are disagreeing. This doesn’t happen to just foreign travelers, as it’s a Thai way of conversing. Sometimes when we say yes, we might actually disagree, so every time you ask a Thai person a question, make sure if their answer is actually yes or no.

4. We love our drinks cold

This one is quite simple. Thailand’s weather is super hot almost throughout the year, even if it’s during the rainy or the winter season (which is ridiculous). We Thais of all ages love iced drinks, and some even like to chew on the ice for an extra-satisfying sensation. Even if sometimes it’s a little chilly outside, we still want some ice in our drinks. We even put ice in our beer too, believe it or not. It’s almost as if it’s hard-wired in our minds that it will be better if we put ice in our drinks (even if they are already chilled). Our advice to you is do ask the waiter/waitress not to bring ice if you don’t want them in your drink, otherwise they will automatically bring a glass of ice along with your drink of choice.

Tissue is another issue foreigners will encounter when traveling in Thailand because we commonly use this toilet paper to wipe/clean just about everything. Paper towel that most Westerners use at home are what we use for absorb excess cooking oil when cooking (and only when we cook). The rest of the time, we use the roll of toilet paper and tissue for everything else. When you have an opportunity to eat at any local Thai food stall, they only have the cheap pink paper for you to wipe you mouth. If you are not accustomed to using this type of tissue, then we suggest you to buy any tissue you like at a local super market or a 7-11 and bring it along with you wherever you go.

6. We love washing our Feet

Another one of the weird Thai habits, washing our feet is actually is an old belief. Thai elders say that cleaning their feet before getting into the house is to was away bad luck, and it also feels refreshing that way. Nowadays, we still do this not only to get rid of odor and dirt, but it feels better and more relaxing that way.

7. We also love our bidet spray

You will most likely find this nozzle spray in Thai restrooms almost everywhere. It’s the bidet shower that neatly cleanse your private parts while you’re doing your deeds. This essential bathroom tool is the one thing that we don’t understand why many countries don’t have/use it. Don’t you want to have your private parts nice and clean every time you get out of the toilet?

F.Y.I.: Some places in Thailand (mostly in the rural areas) don’t have this bidet spray, as they only have a water bowl to draw and clean after your private business. I suggest you to bring a roll of toilet paper/ wet wipes along, since you’ll need some skills to clean your bottom with a water bowl, and especially if it’s a squat toilet.

What do you think? Let us know in the comments if you’ve seen at least one of these weird Thai habits during your stay in the Land of Smiles.

Have a great day!